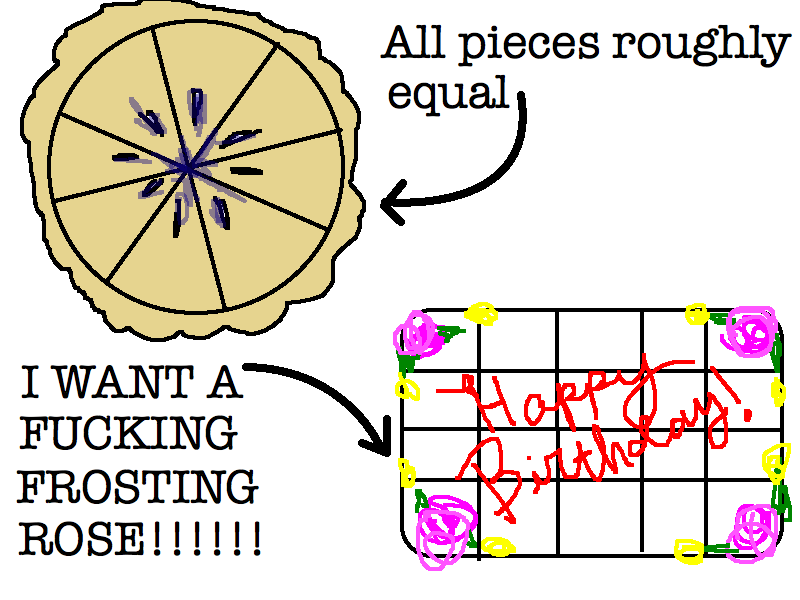 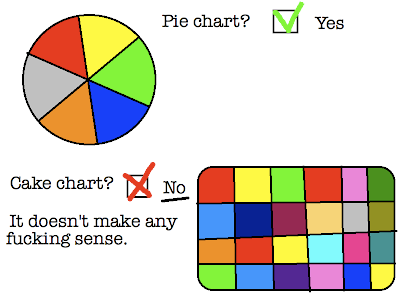 Looking for a headbanging new cookbook for yourself? Ready to trade in advice from Martha for tirades from Mayhem or Gwar? Annick Giroux has written an international heavy metal cookbook titled Hellbent for Cooking, chock full of recipes from metal bands, hailing from over 30 countries.

The dishes are actually mostly tame (e.g. no offal) regional recipes from the band’s country. Still, I would love to tuck into a bowl of Macaroni Against Monotheism (involves 666 g of ground pork, pasta sauce and macaroni), or to sip from Richard Christy from Death’s trademark cocktail (the mighty Viking Testicle).

As you sit down to Thanksgiving dinner tomorrow and are confronted with a standard 9 1/2″ circular pie, consider the fundamental problem of a pie’s crust to filling ratio:

For traditional circular pies of radius R, the amount of filling scales as R2 while the crust only scales linearly, so as the pie grows larger, the flaky crust is completely dominated by the creamy filling.

Our solution was to construct a pie pan in the shape of a koch snowflake (whose perimeter obeys completely different scaling laws), fill it with delicious pecan pie and bake in a custom backyard oven.

The thing they don’t tell you about fractals is just how sharp and dangerous they are. I mean, you think you have a pretty good grasp of the mathematical analysis but until a piece of metal with a very high perimeter to surface area ratio tears into your flesh, you’re really missing intuitive appreciation for objects that lack continuous derivatives almost everywhere.

I can’t wait for this to take off like the Edge brownie pan!

In June, food writer Michael Ruhlman set out a challenge to make a BLT sandwich from scratch. The winners were announced recently, and the best overall winner, Jared Dunnohew of Australia, is pictured above. Though he didn’t do everything from scratch (milling flour was out, he couldn’t press his own oil), Dunnohew did a phenomenal job of collecting/growing most of his other ingredients (harvesting salt from seawater, making cider vinegar from apples).

Best of all, he put together a phenomenal photographic flowchart diagramming how he put together his BLT. This is truly a thing of beauty: http://onehungrychef.freewebhostx.com/blt

Berry Chill was a recent discovery at an all day concert when I was looking for a healthy alternative to all of the cardboard chicken strips and greasy hamburgers.  It has 20 calories per ounce and active cultures.  I signed up for their mailing list and I just received and announcement of Free Berry Chill Yogurt that I am sharing with you below.

The 2009 Football season is here! In honor of Chicago Bears Player Devin Hester’s love of Berry Chill (and our love of the Chicago Bears), every time Hester scores a touchdown for the rest of the season, the following day Berry Chill will treat customers to a free Hester combination yogurt. “The Hester,” is small 5 oz. Original yogurt topped with his favorites (mango, pineapple, and gummy bears) and is available at Berry Chill’s three locations, 635 N. State, 132 N. LaSalle and Ogilvie Station, 500 W. Madison. On the day following the touchdown, simply say “Touchdown for Berry Chill” at the register, and you’ll receive your free Hester treat! Offer will be available in-store only at participating Chicagoland locations during the following business hours (635 N. State, 8 a.m. – 5 p.m., 132 N. LaSalle, 8 a.m. – 12 p.m. and Ogilvie Station, 7 a.m. – 12 p.m.). No substitutions will be granted. Cheering for the Bears was never this sweet!

Vegetarians, from the other point of view!

I know this is an older video, but it came up at lunch today and a bunch of folks had never seen it. Linked here.

After some lunch converstaions, I figured it’d be cool to list the cookbooks I’m currently digging and open up the conversation for anyone who wants to talk about what they’re currently cooking.

I started with a fermented food kick, there’s a great book by Sandor Ellix Katz called “Wild Fermentation” where he extols the virtues of fermented foods in your diet. This is a topic I’ve been curious about ever since I read Salt by Mark Kurlansky where a history of culinary and preservation using Salt was outlined. Fermentation is another basic method of preserving food prior to refrigeration, but also has been used to modify the nutritional content. The book is fascinating and really covers the spectrum from veggies, to cheese, to beer and more.

I had so much success with my home fermentation that I moved on to Indian food which I’ve always wanted to learn how to cook. Not only do I enjoy most dishes I’ve had, but unlike a lot of my fermented products, my wife will eat these too providing an additional motivator. I have a good friend who spent years in India who, after mentioning my new culinary interests, went out on the spot and bought me 660 curries by Raghavan Iyer. The book is fantastic and gives authentic regional samplings, I’ve been slowly making my way through it. Once you sort of get past the complicated number of spices involved, I found the mechanically assembling the dishes isn’t all that tough and typically turns out pretty well even if you mess up a bit.

Finally, I was reading Shark’s Fin and Sichuan Pepper: A Sweet-Sour Memoir of Eating in China by Fushia Dunlop. It’s more of a book about food than a cookbook, for that you have to turn to Land of Plenty (which is currently being shipped to me) or Revolutionary Chinese Cookbook. The book covers her experiences living and traveling through China, learning to cook cuisine and the important role it plays culturally. The book contains a smattering a recipies that relate to the chapter topics, but more than anything it helped me get “excited” about Chinese food in a more meaningful way than jadedly thinking about the heavy corn starch gel coated meats that get served to me at most Chinese restaurants.

What’s everyone else cooking now a days?

Just when I thought I’d seen all possible niche food blogs out there, the long tail of the internet proves me wrong. Introducing Fancy Fast Food, featuring deconstructed, gourmet meals made entirely out of fast food take-out. Above, behold a Tacobellini, made out of a Taco Burrito Supreme. 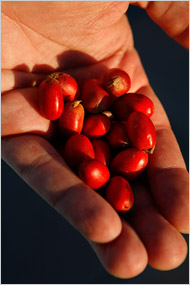 Miracle fruit is a West African berry that is commonly used for “flavor-tripping” parties. The berry rewires the way your palate perceive tastes for an hour or so, making Tabasco sauce taste like donut glaze or lemons taste like candy. Flavor-tripping parties were introduced last year in NY, and have since spread as the fruit becomes more widely available in Florida and online.

For all the conservative naysayers out there who are hellbent on not having fun:

Eating a berry causes the protein miraculin to bind with your taste buds, and induces sweetness when it comes in contact with acids. There are no dangers associated with eating miracle fruit, according to Dr. Linda Bartoshuk at the University of Florida’s Center for Smell and Taste.

A Tiny Fruit That Tricks the Tongue [NYT]